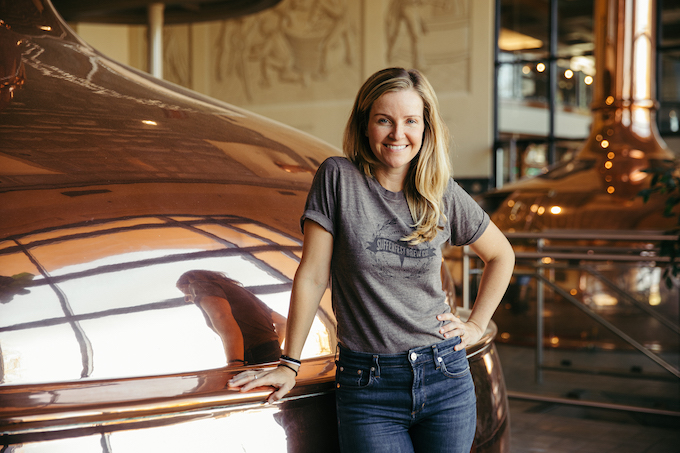 In 2012 Caitlin Landesberg started her search for the perfect post-sweat beer but didn’t find one that spoke to her healthy and active lifestyle while delivering exceptional flavor. Taking matters into her own hands, Caitlin decided to learn how to develop her own beer. She took courses at UC Davis School of Brewing and teamed up with an all-star brewmaster to perfect her recipes. She then started to share her beer with friends and fellow trail runners.

In late 2015, Caitlin left her job (working as the Director of Marketing for the wildly popular fitness app Strava) to pursue Sufferfest Beer Company full time and officially launched her beer to market in March 2016. The product lineup included gluten-removed beers with premium ingredients like bee pollen, salt, and black currant. In March 2019, Sufferfest was acquired by Sierra Nevada. Caitlin is still at the helm of the Sufferfest brand, but now has the distribution and support of a massive brand that is aligned with her company’s sustainability standards and strategic vision. The beer still tastes great to sweaty imbibers with nontraditional ingredients like apple cider vinegar and cayenne and honey, which can be found in the latest brews, Gut Check and Shred.

Caitlin is a Mom to two kids under the age of five and one would think she has her hands plenty full. But then she met Lucy, an adorable donkey who was abandoned in a Walmart parking lot in Sonoma, California.  Lucy now boards down the road from her parents home and they have formed a bond. Naturally, the duo have begun training for their first burro race together.

Caitlin, tell us your favorite thing about Sufferfest today?

Innovation! I love talking to friends and fellow drinkers and putting their wants and suggestions into action. We have some awesome things coming down the pipeline as a result. Pushing the envelope yet never settling on taste is the name of the game for Sufferfest.

What are some of the business lessons you have learned that you wish you could have told yourself five or even ten years ago?

The lesson or mantra I repeat often is: It’s not my job to be right, it’s my job to move the business forward. Another lesson I’ve taken to heart is to advocate for myself and trust my gut. Intuition is way more valuable than I originally thought, especially when building a brand from the ground up and navigating that effort within a larger organization.

What is a normal training day with Lucy like?

Exasperating! I typically spend 30-45 minutes with Lucy brushing her, talking to her, cleaning her feet, putting on her harness and tack just so that we can settle into our “work” together. We then go running different routes for about an hour or two depending on what I have planned. Sometimes I just go out with some treats and make her cross a scary stream over and over again and then we come back 30 minutes later exhausted and hating each other!

What is your favorite trail?
Sun Trail to Panoramic.

Ale or lager?
A beer concoction!

If you could be from any other decade, what would it be?
I’d love to re-do the ’90s!

New Ways to Think About the Press Release